Mendocino Woodlands is home to four Reclaiming witchcamps as well as dozens of other grassroots camps and retreats.

Starhawk’s classic eco-fable for all ages – read by Georgie Craig. With surrealistic illustrations by Lindy Kehoe.

Will the children of the perfect town find their inner power and let a little magic into everyone’s lives?

The nationwide outpouring of protests during the last 10 days has provided a historic moral response to the murder of George Floyd. In one city after another, people braved tear gas, pepper spray, clubs and other weaponry — as well as mass arrests — to nonviolently challenge racist police violence. Those same people were also risking infection with the coronavirus.

Photos from around the country show that a large majority of protesters have been wearing masks, often under very difficult conditions. By doing so, they aren’t only protecting themselves to some extent — they’re also protecting people nearby. As the New York Times just noted, “most experts now agree that if everyone wears a mask, individuals protect one another.”

In other words, wearing a mask is about solidarity.

Unfortunately, some protesters have not worn masks, perhaps unaware that they were putting others at risk. Meanwhile, some police officers have disregarded orders to wear masks.

With latest research indicating that about 35 percent of infected people have no symptoms at all, unwillingness to wear a mask jeopardizes the health of others. That jeopardy is far from evenly distributed. Older people and those with underlying health problems are at higher risk of dying from the coronavirus. African Americans and other people of color are also dying at much higher rates, due to structural racism.

“UC San Francisco epidemiologist Dr. George Rutherford described the protests as a kind of uncontrolled experiment, one that will test what happens when people are wearing masks in an outdoor setting, but yelling and not maintaining their distance,” the Los Angeles Times reported this week. Said Rutherford: “If you have breakdowns in social distancing and don’t have masks on, then you’re deeply in trouble.”

Addressing the chances of exposure to the virus while protesting, California’s Department of Health is urging caution: “Even with adherence to physical distancing, bringing members of different households together to engage in in-person protest carries a higher risk of widespread transmission of COVID-19. . . . In particular, activities like chanting, shouting, singing, and group recitation negate the risk-reduction achieved through six feet of physical distancing. For this reason, people engaging in these activities should wear face coverings at all times.”

Also, if you’re headed to a protest, you might want to consider giving away some masks.

“The virus seems to spread the most when people yell (such as to chant a slogan), sneeze (to expel pepper spray), or cough (after inhaling tear gas),” The Atlantic reported as this week began. “It is transmitted most efficiently in crowds and large gatherings, and research has found that just a few contagious people can infect hundreds of susceptible people around them. The virus can spread especially easily in small, cramped places, such as police vans and jails.”

In Minnesota, the Star Tribune reported, “state health officials will be encouraging people protesting the death of George Floyd to seek COVID-19 testing — regardless of whether they feel sick — due to the increased risk of the disease spreading at mass gatherings.” The newspaper added that “a key recommendation will be when asymptomatic protesters should seek testing, because the incubation period of the virus following infection is around five days — with a range of two to 14 days.” Testing too early could miss the virus.

Protesting is crucial at a moment like this. But protesting must be done without ignoring the pandemic.

While some hazards probably can’t be avoided at demonstrations, wearing a mask remains vital. The reality that it’s difficult if not impossible to maintain six-foot social distancing at a protest makes wearing a mask all the more important. The life you save may not be your own.

At campaign rallies last fall and winter, Bernie Sanders struck a chord when he asked: “Are you willing to fight for that person who you don’t even know as much as you’re willing to fight for yourself?” It was a powerful statement that resonated deeply and became a viral rallying cry. The ethical core remains. And by speaking out and protesting in the wake of George Floyd’s death, large numbers of people have been answering that question with a resounding Yes.

At the same time, those who wear a mask at protests are making clear that they’re willing to undergo some discomfort to protect people they don’t even know.

There are many things we have no control over as we keep pushing to change the political direction of the United States. Whether we wear a mask isn’t one of them.

Norman Solomon is co-founder and national director of RootsAction.org. He was a Bernie Sanders delegate from California to the 2016 Democratic National Convention. Solomon is the author of a dozen books including “War Made Easy: How Presidents and Pundits Keep Spinning Us to Death.” He is the executive director of the Institute for Public Accuracy.

We just posted several new issues of the original Direct Action newspapers – namesake of Luke Hauser’s novel and source of many of the stories contained therein.

Free downloads of a dozen original issues as PDFs, along with activist handbooks and a PDF of the book. 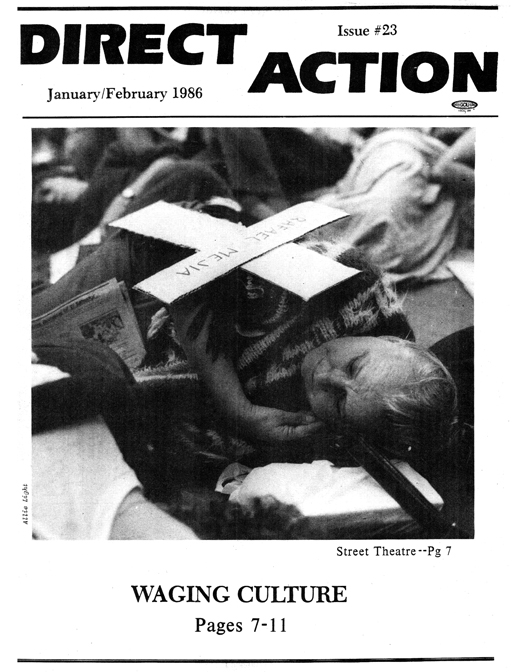 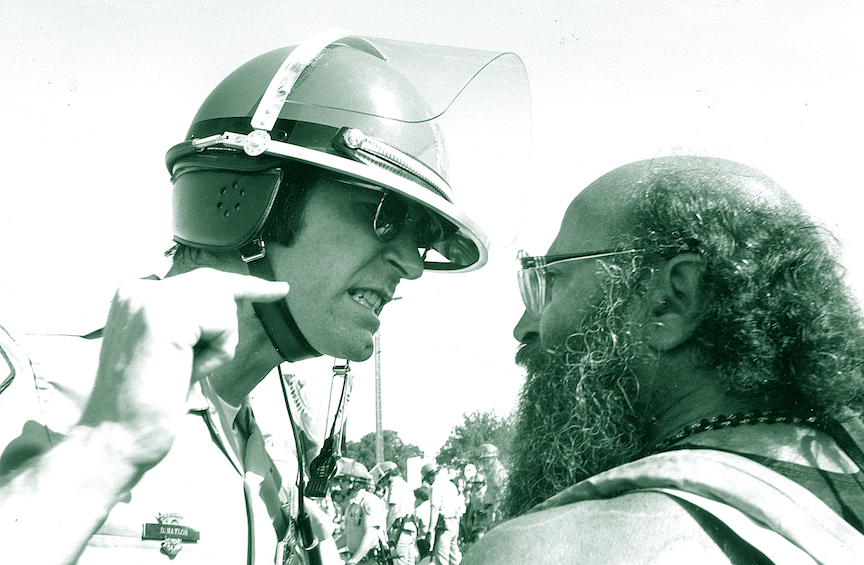 Direct action has a long and honored place in American history – from the revolution itself through abolitionists, suffragists, union organizers, civil rights advocates, feminist and gay rights activists, and on to today’s vibrant climate and social justice organizing.

Click here for A Brief History of Nonviolent Direct Action

Join author Luke Hauser for a profusely illustrated 25-minute journey through our past. We’ll focus especially on nonviolent organizing from 1980 to the present, with sections on the 1980s anti-nuke movement and 2011’s Occupy actions.

Originally created around 2000, the show has been updated with a revised text and many new images.

So make a big bowl of popcorn, pull up your beanbag chair, and get ready for a journey through our history! 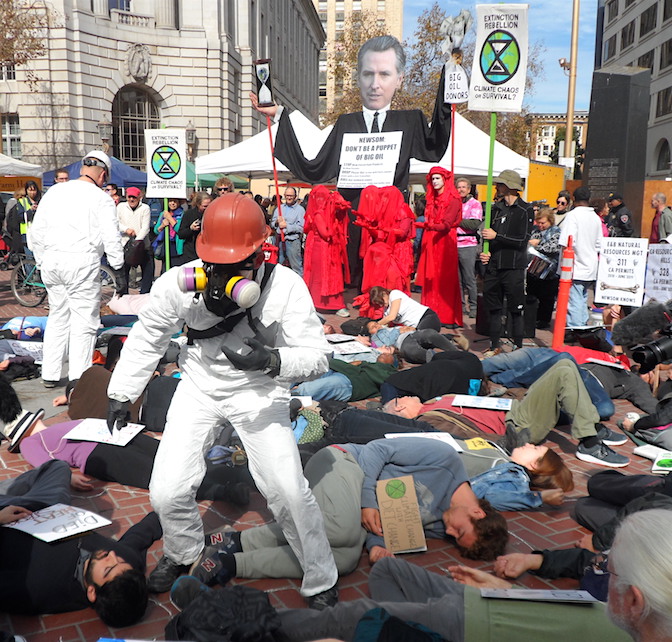 The September 25, 2019 actions were part of international climate justice events, including the global student strike on September 20.

Reclaiming’s Bay Area Pagan Cluster – Witches Invoking Creative Climate Action, or WICCA – organized a ritual for mid-afternoon. The cluster processed down California Street singing We Are the Rising Sun, then did a short Equinox ritual in the middle of the “mural district” of Montgomery Street, ending with a spiral dance to Our Hands Will Work for Peace and Justice (Harvest Chant). 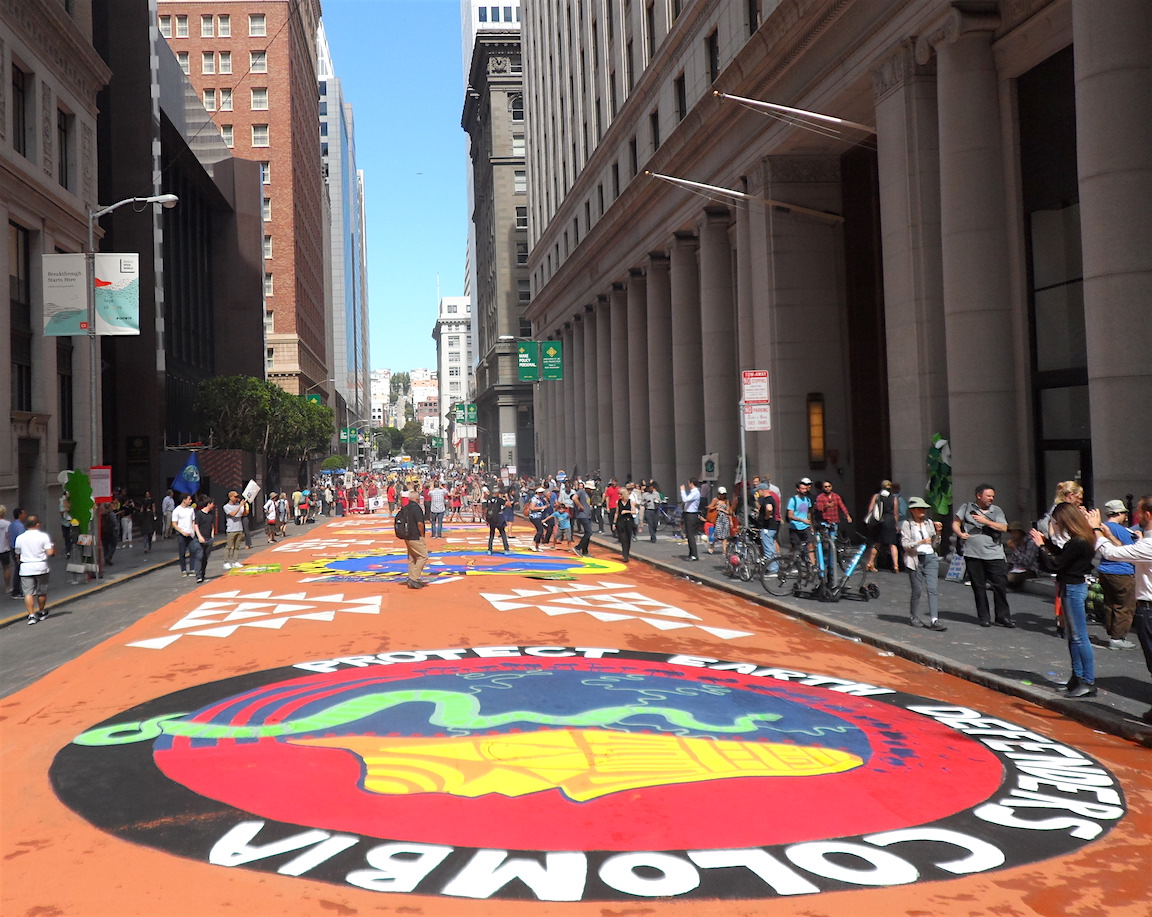